The Shareholders’ Nomination Board of Aspo Plc proposes to the Annual Shareholders' Meeting to be held on April 6, 2022, that the Board of Directors will have seven members.

The Nomination Board proposes that Patricia Allam, Mammu Kaario, Mikael Laine, Salla Pöyry, Tatu Vehmas and Heikki Westerlund, all current members of the company's Board of Directors, be re-elected as members of the Board and Tapio Kolunsarka be elected as a new member of the Board for the term closing at the end of the Annual Shareholders' Meeting 2023.

Since 2020, Tapio Kolunsarka has worked as the CEO of Evac Group. Previously, he served as Ramirent's CEO, and during his career he has also worked as Executive Vice President of UPM Raflatac and in UPM's other management positions in Finland and the United States. In addition, he has a background as a management consultant at McKinsey. Kolunsarka has been a member of Purmo Group's Board of Directors from 2018 to 2021.

Remuneration paid to the members of the Board

- EUR 2,700 per month for members of the Board of Directors

Members of the Nomination Board

The Nomination Board of Aspo Plc’s shareholders consists of the representatives of the four largest shareholders. The following representatives of the largest shareholders were members of the Nomination Board which prepared proposals for the Annual Shareholders' Meeting 2021: Roberto Lencioni, Chairman (Vehmas family, including AEV Capital Holding Oy); Gustav Nyberg (Nyberg family, including Oy Havsudden Ab); Pekka Pajamo, (Varma Mutual Pension Insurance Company); and Annika Ekman (Ilmarinen Mutual Pension Insurance Company). In addition, Heikki Westerlund, Chairman of Aspo Board of Directors, has acted as an expert member of the Nomination Board.

Aspo creates value by owning and developing business operations in the long term. Our companies aim to be market leaders in their sectors. They are responsible for their own operations, customer relationships and the development of these aiming to be forerunners in sustainability. Aspo supports its businesses profitability and growth with the right capabilities. Aspo Group has businesses in 18 different countries, and it employs a total of approximately 960 professionals. 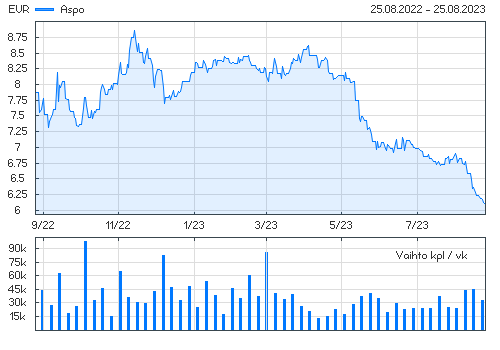 Aspo is a conglomerate that specializes in demanding B-to-B customers. It owns and develops its businesses in Northern Europe and in selected growing markets. Aspo's wholly owned subsidiaries ESL Shipping, Leipurin, Telko and Kauko operate under their own strong brands and provide value for their customers. The objective of the trade and logistics businesses is to be the market leaders in their sectors. Aspo's value is produced by the entity formed by its businesses.