The Board of Directors of Incap Corporation has decided to establish a new long-term incentive plan for the Group´s key employees. The aim of the plan is to align the objectives of the shareholders and key employees for increasing the value of the company in the long term, to retain the key employees at the company, and to offer them a competitive reward plan based on acquiring, earning and accumulating the company´s shares.

The rewards will be paid partly in the company´s shares and partly in cash. The cash proportion of the reward is intended to cover the taxes and statutory social security contributions arising from the reward to a participant. In general, no reward is paid if the participant´s employment or director contract terminates before the reward payment.

INCAP CORPORATION
Board of Directors

Incap Corporation is a trusted partner and full service provider in Electronics Manufacturing Services. As a global EMS company Incap supports customers ranging from large multinationals and mid-sized companies to small start-ups in their complete manufacturing value chain. Incap offers state-of-the-art technology backed up by an entrepreneurial culture and highly qualified personnel. The company has operations in Finland, Estonia, India, Slovakia, the UK and Hong Kong and employs approximately 2,500 people. Incap’s share has been listed on Nasdaq Helsinki Ltd stock exchange since 1997. 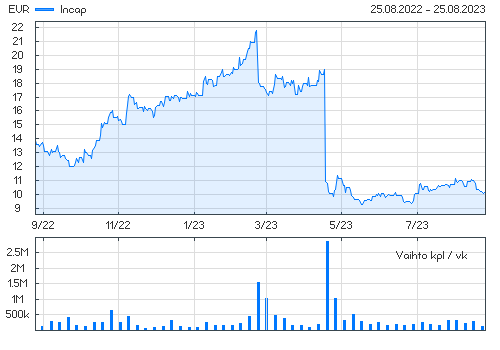