Componenta Corporation ("Componenta" or the "Company") announced on 16 May 2019 that it had signed an agreement on purchasing the shares and capital loans of Komas Oy ("Komas"), a machining operation company, from funds managed by CapMan, Fortaco Oy and certain private persons. The purchase price of the acquisition was paid by issuing shares in the Company to the sellers in accordance with the authorisation granted by Componenta's Extraordinary General Meeting held on 1 July 2019. The purchase price consisted of 60 million new shares issued by Componenta (the "New Shares"), and the purchase price was determined according to the share price at the time of closing the transaction and was EUR 7.8 million. Componenta completed the acquisition of Komas on 30 August 2019.

The Finnish Financial Supervisory Authority has today, 7 November 2019, approved the Finnish language listing prospectus ("Prospectus"), which has been prepared for listing the New Shares on the official list of Nasdaq Helsinki Ltd ("Nasdaq Helsinki"). The listing prospectus will be available as of 7 November 2019 at the website of the Company at www.componenta.com/sijoittajat/sijoittajan-tyokalut/listalleottoesite-2019/ and as a paper version at the registered office of Componenta at Teknobulevardi 7, FI-01530 Vantaa, Finland during office hours as well as at the reception of Nasdaq Helsinki at Fabianinkatu 14, FI-00100 Helsinki, Finland as of 8 November 2019.

Trading in the Company's New Shares on the official list is expected to commence on 12 November 2019, provided that Nasdaq Helsinki approves the listing application. Following the listing of the New Shares, the total amount of the Company's listed shares is 237,269,224.

The Prospectus includes certain previously unpublished financial information of Componenta related to net debt as well as restructuring debt per 30 September 2019, which are presented below:

________
1) The last repayment amounts of Componenta Corporation and Componenta Finland Ltd are bigger as it is assumed that the income from sale of real estate properties unrelated to the core business are used for the repayments at the end of the programme and in addition, it is including the supplementary payment obligation of EUR 3.2 million following the exclusion of loan guarantee of EUR 80 million.

The Unaudited pro forma financial information has been prepared in accordance with the commission delegated regulation (EU) 2019/980 annex 20 and the accounting principles applied by Componenta Group.

Shareholders and prospective investors are instructed to acquaint themselves with the entire Prospectus in addition to this stock exchange release.

Componenta is a technology company which specializes in supplying cast and machined components to global manufacturers of vehicles, machines and equipment. The company's share is listed on Nasdaq Helsinki. 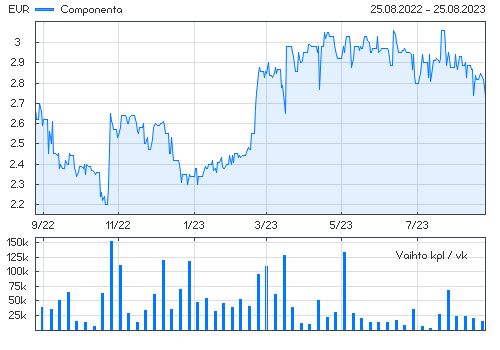