The right to nominate the members representing the shareholders belongs to the four shareholders whose share of the votes produced by all of Honkarakenne's shares, according to the shareholder list maintained by Euroclear Finland Oy, is the largest on the last business day of August before the Annual General Meeting.

The following members have been appointed to Honkarakenne’s Shareholders’ Nomination Committee:

In its meeting on November 8, 2022, the Nomination Committee elected Mauri Saarelainen as chairman of the Committee and invited Kyösti Saarimäki, Chairman of Honkarakenne's Board of Directors, to act as an expert member in the Committee.

The Shareholders’ Nomination Committee will forward its proposals for the Annual General Meeting 2023 to Honkarakenne’s Board of Directors by January 31, 2023.

Honkarakenne Oyj manufactures high-quality, healthy and ecological log homes, holiday homes and public buildings under its Honka® brand from Finnish solid wood. The company has delivered 85,000 buildings to over 50 countries. House kits are manufactured in Finland, the company's own factory is located in Karstula. In 2021, Honkarakenne Group's net sales were EUR 69.7 million, of which exports accounted for 37%. www.honka.com 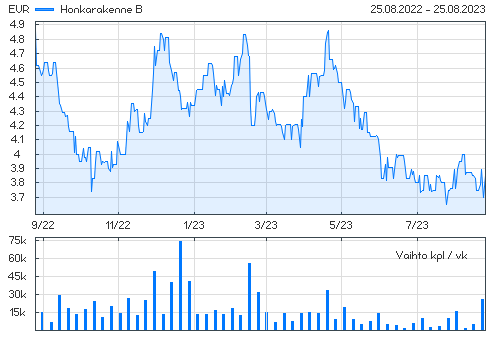