Maciej Kranz (54, MBA. Business Administration), has been appointed Chief Technology Officer and Executive Vice President, KONE Technology and Innovations, as of July 1, 2019. He will join the KONE Executive Board and report to Henrik Ehrnrooth, President and CEO, KONE Corporation. He will be based in Espoo, Finland.

Maciej Kranz joins KONE from Cisco Systems Inc., where he has most recently served as Vice President and General Manager in Corporate Strategic Innovation Group. During his 20 years in Cisco Systems, he has held several leadership roles in the fields of enterprise networking and Internet of Things.

Maciej Kranz succeeds Tomio Pihkala (43, M.Sc. Mechanical Engineering), who has been appointed Executive Vice President, New Equipment Business as of July 1, 2019. In this role, Tomio Pihkala succeeds Heikki Leppänen, who has served as Executive Vice President, New Equipment Business and member of the Executive Board since 2005. Heikki Leppänen has been employed by KONE since 1982. He has decided to leave his position to focus on non-executive duties.

"I would like to thank Heikki for his strong and dedicated leadership. Heikki has during his 37 years at KONE and 14 years as a member of the Executive Board been instrumental in developing KONE's business and in driving growth in our new equipment business. Heikki has had an important role in many of KONE's significant transformations and innovations, including the launch of KONE MonoSpace in 1996, and in the growth of the company from a small player to the market leader in China. Most recently Heikki has  been a strong champion in developing KONE's customer-centricity further," says President and CEO Henrik Ehrnrooth.

"I am very happy to welcome Maciej to KONE and to the Executive Board. In his previous positions he has demonstrated strong leadership in turning digital opportunities into clear business benefits. He clearly knows how to deploy the newest technology in developing and commercializing new solutions and services for the benefit of customers, and will bring his passion for customer co-creation to KONE. At the same time, I am delighted about Tomio's appointment to lead our New Equipment Business. Tomio has a proven track record of leadership roles in several business lines in both Europe and in China, and most recently in leading our Technology and Innovations unit. His capabilities, experience and leadership skills are great assets in further developing our new equipment business from an already strong base," Henrik Ehrnrooth continues.

About KONE
At KONE, our mission is to improve the flow of urban life. As a global leader in the elevator and escalator industry, KONE provides elevators, escalators and automatic building doors, as well as solutions for maintenance and modernization to add value to buildings throughout their life cycle. Through more effective People Flow®, we make people's journeys safe, convenient and reliable, in taller, smarter buildings. In 2018, KONE had annual sales of EUR 9.1 billion, and at the end of the year over 57,000 employees. KONE class B shares are listed on the Nasdaq Helsinki Ltd. in Finland.

At KONE, our mission is to improve the flow of urban life. As a global leader in the elevator and escalator industry, KONE provides elevators, escalators and automatic building doors, as well as solutions for maintenance and modernization, which add value to the life cycle of any building. Through more effective People Flow®, we make people’s journeys safe, convenient and reliable, in taller, smarter buildings. Together with our partners and customers around the world, we help cities to become better places to live in. 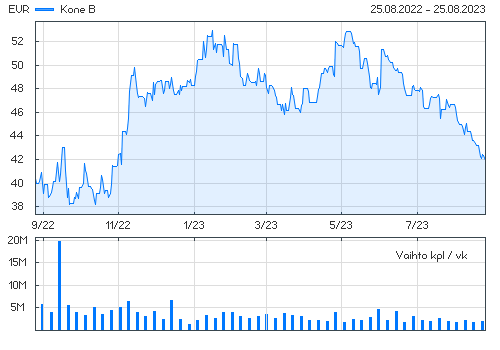