The Board of Directors of Lamor Corporation Plc has decided to establish new share-based incentive plans for the key personnel of Lamor.

The rewards from the plans will primarily be paid partly in Lamor shares and partly in cash. The cash proportions of the rewards are intended for covering taxes and statutory social security contributions arising from the rewards to the participants. The Board of Directors decides at the reward payment whether the share proportion will be paid by using existing treasury shares or new Lamor shares to be issued. In general, no reward is paid if the participant’s employment or director contract terminates before the reward payment.

In the Performance Share Plan, the key individuals are given an opportunity to earn Lamor’s shares based on achievement of performance targets set by the Board of Directors. The Performance Share Plan comprises three plan periods, covering the financial years 2022–2024, 2023–2025, and 2024–2026. The potential rewards will be paid within four months after the end of each plan period. The potential rewards will be capped at a share price set by the Board of Directors for each plan period.

During the plan period 2022–2024, the performance criterion is adjusted earnings per share (adjusted EPS) from the financial year 2022.

The Board of Directors has approved six (6) key individuals, including Management Team members and the CEO, as eligible for participating in the plan period 2022–2024. The gross rewards to be paid on the basis of the plan period 2022–2024 correspond to the value of approximate maximum total of 110,000 Lamor shares calculated with the closing price of the share in Nasdaq Helsinki Ltd. on the day preceding the decision made by the Board of Directors.

Long-term Incentive Plan for the CEO

Long-term Incentive Plan for the CEO is a one-time plan covering the financial years 2022–2028. In the plan, the CEO is given an opportunity to earn Lamor shares as a reward based on the increase of Lamor’s market value.

The reward payment is dependent on exceeding and maintaining the market value thresholds of EUR 200 million, EUR 300 million, EUR 400 million and EUR 500 million set by the Board. The gross rewards to be paid for the CEO on the basis of the plan correspond to the value of maximum total of 550,000 Lamor shares, including also the cash proportion.

The potential rewards will be paid in two or several instalments during the financial years 2024–2029 after each of the set targets have been reached. The rewards paid for each market value threshold will be paid in two instalments: 50 percent of the reward is paid after the market value threshold has been achieved and the remaining 50 percent is paid only if the company’s market value is on the required level at the end of the respective reward payment year or at the end of any following year end during the plan.

The CEO is obliged to hold 50 per cent of the received reward shares as long as the position as a CEO continues and also for the following 12 months thereafter.

Lamor is one of the leading global providers of environmental solutions. Lamor provides its customers with equipment used for oil recovery, waste management, and water treatment as well as versatile environmental solutions and services, such as clean-up and preparedness services related to oil spill response and oil spills, services for the treatment of waste and tailored and adapted water treatment solutions. Lamor operates together with its local partners, offering a wide selection of solutions, which can be tailored according to the needs of each customer, and aiming to clean the world, for which the company has worked since its incorporation. The company’s share is listed on the Nasdaq First North Premier Growth Market Finland marketplace maintained by Nasdaq Helsinki under the trading code LAMOR. Further information: www.lamor.com 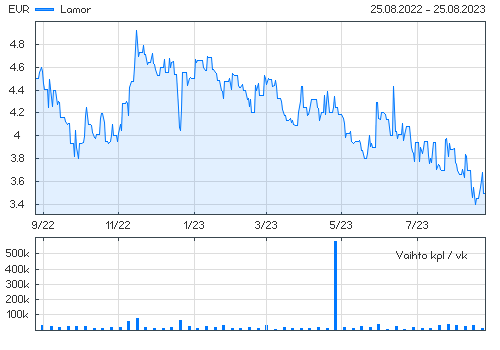