The Martela Group anticipates that its revenue and operating result in 2019 will improve slightly compared to the previous year. Traditionally Group’s operating result accumulates during the second half of the year.

The change in the sales channel in Norway and in Sweden is progressing according to the plan and both revenue and new orders increased in both countries compared to same time previous year.

Operating result decreased compared to last year and was EUR -1.9 million (-0.9). This was mainly influenced by a toughened competition, which resulted to a lower sales margin. Actions done last year to streamline internal processes and further centralize support functions to Finland have positively impacted to company’s operating result, but this was not enough to compensate the impact of decreased margins. We have started actions to improve our sales margin and to decrease our fixed expenses. Impact of these actions will clarify during the second quarter this year. Operating cash flow improved and was EUR 1.0 million (-0.3). Delivery accuracy has remained on an excellent level.

Despite the challenges in market conditions have decreased our revenue and operating result in the short term, we strongly believe that basis for our strategy remains. Transformation in working and learning environments will continue, get stronger and expand. Working and learning environments will have to be able to adapt faster as needs and circumstances keep constantly changing. This will require capabilities to follow and understand the use of space, and needs of the users and to be able to renew and optimize the space according to those needs. Martela has expanded the strategically important Pod family by introducing several new products into it. These are specifically planned to meet the requirements of constantly growing need of flexible spaces.

We believe that market conditions will remain challenging. In addition to this, postponement of frame agreement negotiations in the Finnish public sector will cause uncertainty in the short term. Positive development in other customer segments is supported by several new Nordic wide frame agreements. We will be focusing on increasing the sales volumes and to improve our profitability.”

There has not been any major changes in the private sector market conditions. However, demand for Finnish public sector will temporarily be affected negatively by postponement of frame agreement negotiations. The demand for Martela’s products and services is fundamentally affected also by the general economic situation and by the extent to which companies and the public sector need to strengthen the utilisation of their spaces and make their workplaces more effective as management tools.

A briefing for analysts, portfolio managers and the media will take place on Thursday 25th of April, 2019 from 11.30 a.m. to 12.30 p.m. EET at Martela House at Takkatie 1, Helsinki. The results will be presented by Matti Rantaniemi, CEO.

Martela Corporation
Board of Directors

Martela is one of the Nordic leaders specializing in user centric working and learning environments. We offer our customers a single point of contact for the entire workplace lifecycle - from specifying the space need to maintaining the workplace in a prime condition. 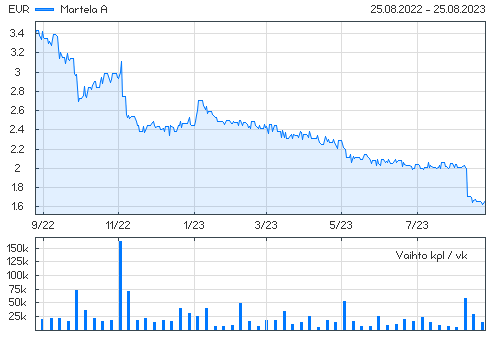