The orders have come from four different clinics located in the United States, Russia, Finland and Germany.

Nexstim’s NBS System is using the unique SmartFocus® nTMS technology developed by the company. It is the only FDA cleared and CE marked navigated TMS system for pre-surgical mapping of the speech and motor cortices of the brain.

NBS system is used, for example, in planning neurosurgery or radiation therapy after a patient has had a diagnosis of a brain tumour or other disorder: When the lesion is thought to be close to functional areas of the brain—such as those responsible for speech production and limb movement —the brain maps generated with NBS can be invaluable when deciding the best, personalised treatment option for the patient.

Martin Jamieson, CEO of Nexstim, commented: “These new orders from four different countries show the strong foothold Nexstim has worldwide in the field of neurosurgery. Several world-leading neurosurgical institutions rely on our NBS system with SmartFocus® nTMS technology—this tells about its distinctives capabilities in personalising the stimulation target for each patient.

Further information is available on the website www.nexstim.com, or by contacting:

Nexstim is a Finnish, globally operating medical technology company. Our mission is to enable personalized and effective therapies and diagnostics for challenging brain diseases and disorders.

Nexstim has developed a world-leading non-invasive brain stimulation technology called SmartFocus®. It is a navigated transcranial magnetic stimulation (nTMS) technology with highly sophisticated 3D navigation providing accurate and personalized targeting of the TMS to the specific area of the brain.

In addition, Nexstim is commercializing its SmartFocus® based Navigated Brain Stimulation (NBS) system for diagnostic applications. The NBS system is the only FDA cleared and CE marked navigated TMS system for pre-surgical mapping of the speech and motor cortices of the brain. Nexstim shares are listed on the Nasdaq First North Growth Market Finland and Nasdaq First North Growth Market Sweden. 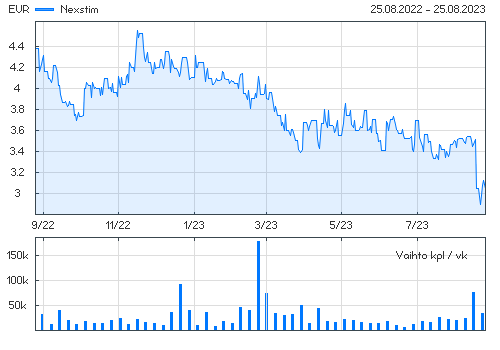