NoHo Partners Plc has concluded negotiations regarding a financing package

NoHo Partners Plc has concluded negotiations regarding a financing package

The sudden change in the market has considerably affected the operations of NoHo Partners. On 31 March 2020, the Finnish Government issued a decree to the Parliament to close restaurants, cafes and bars. The goal of the closure is to protect the population and guarantee the normal functioning of society. The restriction of opening hours is in force until the end of May.

NoHo Partners announced on 26 March 2020 that it was engaged in negotiations on bridge financing for the duration of the business disruption caused by the coronavirus crisis. The negotiations with the company’s current financers in all of its market areas in Finland, Denmark and Norway have been concluded and an agreement was reached regarding a financing package of EUR 34 million. The interest on the bridge financing is under 4 per cent, including Finnvera’s guarantee commission for EUR 15 million of the financing.

The financing will be used for the company’s operations during the crisis and for the management of working capital. The company estimates that its monthly turnover during the state of emergency will be over EUR 1 million and monthly expenses will be approximately EUR 2–3 million per month, depending on the ongoing lease negotiations.

At the same time, the company announces that it will complete the acquisition of Friends & Brgrs with separate financing. The company estimates that the Friends & Brgrs chain will provide significant potential for additional digital and takeaway sales, increasing during the crisis as well.

“As soon as it became apparent how much the coronavirus crisis would impact business, we reacted immediately by starting adjustment measures and preparing for the changed market conditions. I want to thank our personnel for the spirit in which we managed to conclude the adjustment measures so quickly in extremely difficult circumstances.

I would also like to thank our suppliers which have been hit hard in the current situation as our turnover came to a halt and our past months’ trade payables expired. Under normal conditions, we operate with a negative working capital position of approximately EUR 15 million that partly funds our growth. In the current exceptional situation, we are forced to finance this amount using external debt. The situation will naturally get back to normal as soon as our normal business operations restart and our turnover returns. With the working capital financing raised now, we can fulfil our obligations towards our subcontractors.

The negotiated financing package will provide us with a bridge over the most difficult part of the state of emergency and we have started to draft plans for restarting in this changing environment. I believe that the basic human desire for interaction and experiences will not disappear as a result of this crisis. However, it is clear that we have to adapt to the new situation of decreasing purchasing power but also decreasing supply and competition,” says Aku Vikström, CEO of NoHo Partners.

As part of its financing agreement, the company negotiated a repayment holiday until April 2021 for its current funding. The company is assessing several sources of funding to ensure the refinancing of the EUR 22 million of debt associated with the commercial paper programme in May and will provide information about the progress of the funding negotiations later.

On 13 March 2020, NoHo Partners announced it would start laying off its personnel in order to minimise the negative financial impact of the coronavirus on its business. On 18 March 2020, the company announced that the layoffs would be temporary, with a duration of 90 days at most, and that they would concern all of the Group’s personnel in Finland, totalling approximately 1,300 employees.

Starting on 1 April 2020, the company has temporarily laid off seven of the eleven members of NoHo Partners’ Executive Team and 1,030 of its regular employees. Persons on family and study leave or other long leave are not included in the scope of the layoffs. The final number of laid off employees and the duration of the layoffs will be specified at a later time.

Government assistance during the state of emergency

In Finland, the situation regarding direct business subsidies for restaurant businesses is still open and the company is actively taking part in the supervision of interests via its work in the Board of Finnish Hospitality Association (MaRa).

In Denmark, the company has received a direct subsidy for the interruption of business. Up to 75% of monthly salaries and 90% of hourly salaries will be compensated up to a maximum of EUR 4,000. As a prerequisite for receiving the subsidy, the company must not dismiss any personnel. About 80% of fixed expenses will be compensated in increments in proportion to the decrease in turnover.

In Norway, the government grants a direct subsidy by paying approximately 80% of fixed expenses. In addition, the government made layoffs easier and took on 12 days worth of salaries for the layoff period, which the company normally would be obligated to pay for 14 days.

On 13 March 2020, NoHo Partners Plc cancelled its previous profit guidance for 2020 (issued on 5 March 2020). At this time, the company is not specifying its turnover and profitability forecast for this year in more detail due to the uncertain market situation.

The financial impact of the coronavirus cannot currently be fully estimated because it depends on the duration and length of the measures implemented to mitigate the spread of the virus as well as on the markets’ speed of recovery. As previously announced, the company is not changing its long-term financial objectives at this stage.

NoHo Partners will be in touch with the company’s analysts within the day.

NoHo Partners Plc is a Finnish group established in 1996, specialising in restaurant services. The company, which was listed on NASDAQ Helsinki in 2013 and became the first Finnish listed restaurant company, has continued to grow strongly throughout its history. The Group companies include some 250 restaurants in Finland, Denmark and Norway. Well-known restaurant concepts of the company include Elite, Savoy, Teatteri, Yes Yes Yes, Stefan’s Steakhouse, Palace, Löyly, Hanko Sushi and Cock’s & Cows. In 2019, NoHo Partners Plc’s turnover was MEUR 272.8 and EBIT MEUR 30.6. Depending on the season, the Group employs approximately 2,100 people converted into full-time workers. 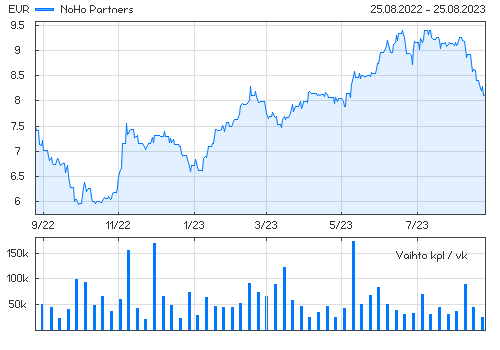 NoHo Partners is one of the leading restaurant groups in Finland. As a strongly growing and increasingly international operator, we want to advance and enrich the Northern European restaurant field by taking tried and true concepts seamlessly to new markets and bringing in the latest trends from abroad.