RAUTE CORPORATION STOCK EXCHANGE RELEASE 31 MARCH 2021 at 7:30 p.m.
DECISIONS OF RAUTE CORPORATION'S ANNUAL GENERAL MEETING 2021
Raute Corporation's Annual General Meeting was held in Lahti today. Due to the special circumstances caused by the corona virus pandemic, strict precautionary measures were taken to ensure safety at the meeting while at the same time ensuring the shareholders possibility to exercise their rights. A majority of the shareholders participated in the meeting through a representative and a proxy. Approximately 75 percent of voting rights were represented in the meeting, while only ten persons were physically present. The company wants to thank all registered shareholders for their flexibility in this exceptional situation.

Raute Corporation's Annual General Meeting adopted the Financial Statements, approved the Remuneration Report for Governing Bodies and discharged the members of the Board of Directors and President and CEO from liability for the financial year 1 January to 31 December 2020.

Raute is a technology and service company that operates worldwide. Raute's customers are companies operating in the wood products industry that manufacture veneer, plywood, LVL (Laminated Veneer Lumber) and sawn timber. Its technology offering covers the entire production process for veneer, plywood and LVL and special measurement equipment for sawn timber. As a supplier of mill-scale projects, Raute is a global market leader both in the plywood and LVL industries. Additionally, Raute's full-service concept includes technology services ranging from spare parts deliveries to regular maintenance and equipment modernizations. Raute's head office is located in Lahti, Finland. The company's other production plants are located in Kajaani, Finland, the Vancouver area of Canada, the Shanghai area of China and in Pullman, Washington, USA. Raute's net sales in 2020 were EUR 115.0 million. The Group's headcount at the end of 2020 was 751. More information about the company can be found at www.raute.com. 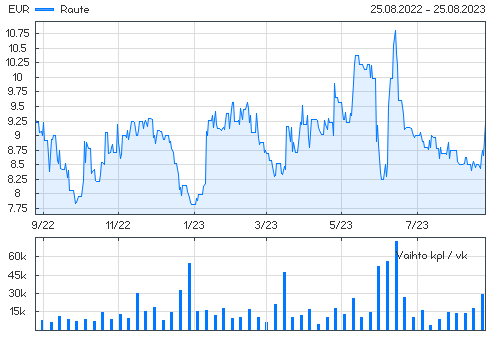