Rovio Entertainment Corporation: Repurchase of own shares on 24 November 2022

About Rovio:
Rovio Entertainment Corporation is a global mobile-first games company that creates, develops and publishes mobile games, which have been downloaded over 5 billion times. Rovio is best known for the global Angry Birds brand, which started as a popular mobile game in 2009, and has since evolved from games to various entertainment, animations and consumer products in brand licensing. Rovio has produced The Angry Birds Movie (2016), and it’s sequel, The Angry Birds Movie 2 was released in 2019. The company offers multiple mobile games and has seven games studios – two in Espoo (Finland), one in Stockholm (Sweden), Copenhagen (Denmark), Montreal and Toronto (Canada), as well as a subsidiary in Izmir (Turkey) called Ruby Games, which was acquired in 2021. Most of the employees are based in Finland where Rovio is headquartered. The company’s shares are listed on the main list of NASDAQ Helsinki stock exchange with the trading code ROVIO. (www.rovio.com) 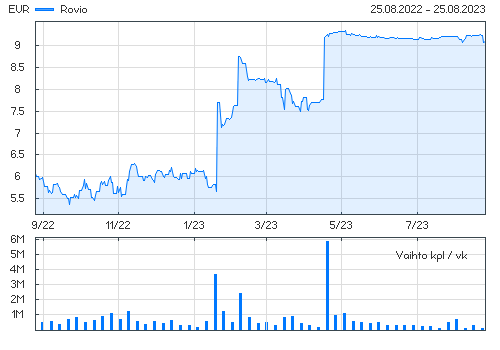