SRV Yhtiöt Oyj: SRV discloses the new hybrid terms and conditions regarding the notes becoming effective and the accurate results of the tender offer

The distribution of this release may be restricted by law and persons into whose possession any document or other information referred to herein comes should inform themselves about and observe any such restrictions. The information contained herein is not for publication or distribution, directly or indirectly, in or into Australia, Canada, Japan or the United States. Any failure to comply with these restrictions may constitute a violation of the securities laws of any such jurisdiction. This release is not directed to, and is not intended for distribution to or use by, any person or entity that is a citizen or resident or located in any locality, state, country or other jurisdiction where such distribution, publication, availability or use would be contrary to law or regulation or which would require any registration or licensing within such jurisdiction.

This release is only being distributed to and is only directed at (i) persons who are outside the United Kingdom or (ii) investment professionals falling within Article 19(5) of the Financial Services and Markets Act 2000 (Financial Promotion) Order 2005 (the "Order") or (iii) high net worth companies, and other persons to whom it may lawfully be communicated, falling within Article 49(2)(a) to (d) of the Order (all such persons together being referred to as "relevant persons"). Any securities mentioned herein are only available to, and any invitation, offer or agreement to subscribe, purchase or otherwise acquire such securities will be engaged in only with, relevant persons. Any person who is not a relevant person should not act or rely on this release or any of its contents.

This release does not constitute a prospectus as defined in the Prospectus Regulation and as such, does not constitute or form part of and should not be construed as, an offer to sell, or the solicitation or invitation of any offer to buy, acquire or subscribe for, any securities or an inducement to enter into investment activity.

Investors are advised to familiarise themselves with the notices of written procedures and the information presented therein.

No part of this release, nor the fact of its distribution, should form the basis of, or be relied on in connection with, any contract or commitment or investment decision whatsoever. The information contained in this release has not been independently verified. No representation, warranty or undertaking, expressed or implied, is made as to, and no reliance should be placed on, the fairness, accuracy, completeness or correctness of the information or the opinions contained herein. SRV or any of its respective affiliates, advisors or representatives or any other person, shall have no liability whatsoever (in negligence or otherwise) for any loss however arising from any use of this release or its contents or otherwise arising in connection with this release. Each person must rely on their own examination and analysis of SRV, its subsidiaries, its securities and the transactions, including the merits and risks involved. 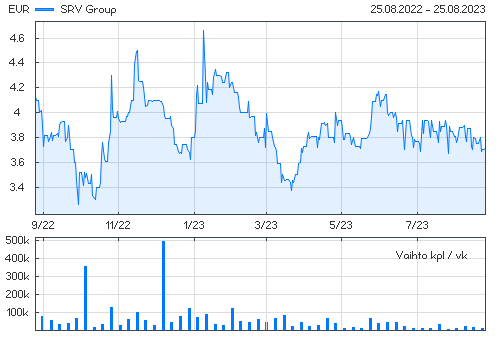 SRV is a leader in the development of innovative construction projects. We seek to provide the best customer experience as a builder of urban centres and to be the industry’s most inspiring workplace. Genuine cooperation and enthusiasm is visible in every encounter with us.