The Board of Directors of WithSecure Corporation has decided to launch a new share-based incentive plan for the CEO, Leadership Team and other key leaders of the company. The aim of the new plan is to align the objectives of the shareholders and the key leaders, to increase the value of the company in the long-term. The plan is intended to encourage key leaders to personally invest in the company’s shares, to steer them toward achieving the company’s strategic objectives, to retain them at the company, and to offer them a competitive incentive plan that is based on acquiring, earning and accumulating WithSecure shares.

The new Performance Matching Share Plan 2022—2026 includes one performance period, starting on 1 September 2022 and ending on 30 November 2026. In the plan, the participants are given an opportunity to earn WithSecure shares as a reward based on the development of WithSecure Corporation’s market value. The achievement of the targets set for the company´s market value will determine the proportion out of the maximum reward that will be paid as reward to participants. The prerequisite for participation in the plan and receiving reward on the basis of the plan is that a participant personally has acquired WithSecure shares up to the number determined by the Board of Directors. Participants can invest in aggregate 1.8 – 2.3 million euros in WithSecure shares. Furthermore, payment of reward is based on the participant´s valid employment or service upon reward payment.

The rewards from the plan will be paid partly in the company’s shares and partly in cash after the end of the performance period. The cash proportion is intended to cover taxes and tax-related costs arising from the reward to the participant. As a rule, no reward will be paid, if a participant´s employment or service terminates before the reward payment. The CEO and other members of the Leadership Team are recommended to keep the shares paid as a reward as long as the membership in the Leadership Team continues.

The target group of the plan consists of a maximum of 21 persons, including the CEO and other members of the Leadership Team. The rewards to be paid on the basis of the plan will amount up to the value corresponding to an approximate maximum total of 7,900,000 WithSecure shares, including also the proportion to be paid in cash. The final number of shares will depend on the participants’ personal share acquisitions and the achievement of the targets set for the performance criterion. 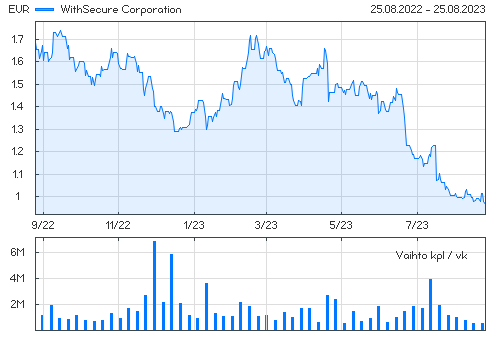 WithSecure™, formerly F-Secure Business, is cyber security’s reliable partner. IT service providers, MSSPs and businesses – along with the largest financial institutions, manufacturers, and thousands of the world’s most advanced communications and technology providers – trust us for outcome-based cyber security that protects and enables their operations. Our AI-driven protection secures endpoints and cloud collaboration, and our intelligent detection and response are powered by experts who identify business risks by proactively hunting for threats and confronting live attacks.