Rio Tinto Mining and Exploration Limited, a subsidiary of the Rio Tinto Group, has confirmed to Arctic Minerals the completion of a satisfactory due diligence for the mutual joint venture agreement between the two companies.

Rio Tinto Mining and Exploration Limited, a subsidiary of the Rio Tinto Group, has confirmed to Arctic Minerals the completion of a satisfactory due diligence for the mutual joint venture agreement between the two companies.

We are pleased to receive the confirmation from Rio Tinto that the conditions for our common joint venture are now met. Through the agreement, Arctic Minerals now has funding for extensive exploration work in Peräpohja. Rio Tinto is one of the world's largest and most respected mining groups, which guarantees the highest quality for our mutual joint venture project, says Jonatan Forsberg, CEO of Arctic Minerals.

On January 21, 2020, Arctic Minerals announced that the Company had entered into an earn-in and joint venture agreement with Rio Tinto. The agreement provides for Rio Tinto to earn an initial 51% interest in certain Arctic Minerals' exploration properties in the Peräpohja Schist Belt of northern Finland by spending a total of US$ 4 million on exploration within 3 years of the effective date of the agreement. Rio Tinto may increase its interest to 75% by spending a further US$ 5 million over a subsequent 2-year period. Once Rio Tinto's interest has reached 75%, each Party can maintain its interest by contributing to exploration spending on a pro-rata basis or choose to be diluted pro-rata. The agreement was subject to the completion of satisfactory due diligence by Rio Tinto. Rio Tinto has now confirmed to Arctic Minerals that a satisfactory due diligence is completed.

The geology of the Peräpohja Schist Belt of southern Finnish Lapland has many similarities to that of the Zambian Copper Belt, one of the world's main sources of copper and also a major source of cobalt. Arctic Minerals' main exploration target in Peräpohja is a type of mineralisation called "SSC" (Stratiform Sediment-hosted Copper), typical of that found in the Zambian Copper Belt.

At present, Arctic Minerals has exploration permits in the Raahe-Ladoga ore belt of central Finland, and has applied for an exploration permit in the Peräpohja schist belt in northern Finland. In addition, the Group has exploration reservations in the Peräpohja schist belt, in the Kiiminki schist belt northeast of Oulu, Paasivaara northeast of Kemi and in Central Lapland. Arctic Minerals also owns mineral rights to the closed Bidjovagge gold- copper mine in Finnmark in northern Norway.

This information is information that Arctic Minerals AB is obliged to make public pursuant to the EU Market Abuse Regulation (EU) 596/2014. The information was submitted for publication, through the agency of the contact person set out above, at 11.10 on May 15, 2020. 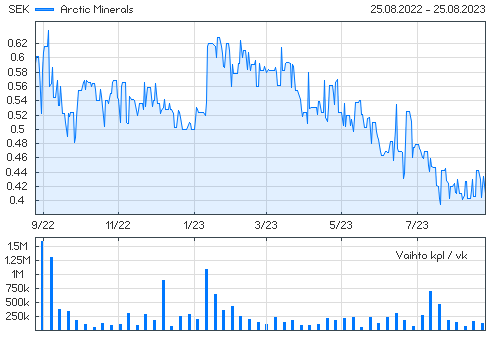