Bulletin from the Annual General Meeting of CellaVision AB (publ)

The following resolutions were passed at the Annual General Meeting (the “AGM”) of CellaVision AB (publ) (“CellaVision”) on 11 May 2022 in Lund.

Allocation of profit
The AGM resolved, in accordance with the Board of Directors’ proposal, on a dividend of SEK 2 per share with record date on 13 May 2022. The dividend is expected to be paid by Euroclear Sweden AB on 18 May 2022.

CellaVision is an innovative, global medical technology company that develops and sells its own leading systems for routine analysis of blood and other body fluids in health care services. The products replace manual laboratory work, and secure and support effective workflows and skills development within and between hospitals. The company has leading-edge expertise in sample preparation, image analysis, artificial intelligence and automated microscopy. Sales are via global partners with support from the parent company in Lund and by the company´s 17 local market support organizations covering more than 40 countries. In 2021, sales were SEK 566 million and the company's growth target is 15% per year over an economic cycle. CellaVision's registered office is in Lund, Sweden. The share is listed on the Nasdaq Stockholm, Mid Cap list. Read more at www.cellavision.com

Bulletin from the Annual General Meeting of CellaVision AB (publ) 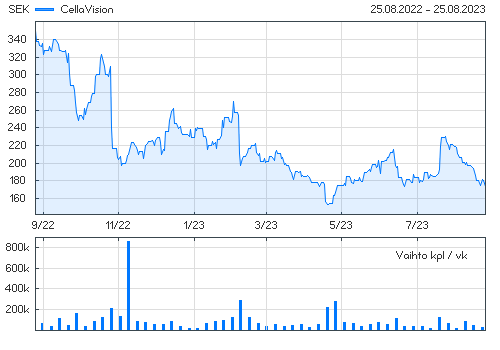