Cantargia AB holds a large number of granted patents related to IL1RAP as a target for antibody treatment of cancer. One of Cantargia's European patents for treatment of solid tumors, EP 3020730 B1, was opposed by a third party in 2019. Following a hearing at the European Patent Office (EPO), the Opposition Division confirmed the validity of this European patent and rejected the opposition. Cantargia's extensive patent protection for IL1RAP-targeting therapy is thus fully maintained with unchanged claim scope.

Cantargia has extensive patent protection for IL1RAP-targeted antibody therapy and diagnostics of cancer. Cantargia's patent families also include patents related to treatment of leukemias and solid tumors, granted in key commercial territories such as the US and Europe.

As communicated on 10 October 2019, MAB Discovery GmbH filed an opposition against one of these patents, European patent no. EP 3020730 B1. This is Cantargia's second granted European patent related to therapy of solid tumors, with claims directed to anti-IL1RAP antibody for treatment of solid tumors expressing IL1RAP.

Following a hearing before the EPO's Opposition Division, MAB Discovery's arguments against the validity of Cantargia's patent were rejected and patent no. EP 3020730 B1 was fully maintained in its originally granted form. Thus, Cantargia's extensive patent protection for IL1RAP-targeting therapy remains unchanged and in force. It should be noted, however, that the decision of the Opposition Division to uphold the patent is appealable.

"We are pleased by the outcome of this opposition process, which validates our strong patent position." said Göran Forsberg, CEO of Cantargia.

This is information that Cantargia AB is obliged to make public pursuant to the EU Market Abuse Regulation. The information was submitted for publication, through the agency of the contact person set out above, at 11.30 CET on 30 September 2021.

About Cantargia
Cantargia AB (publ), reg. no. 556791-6019, is a biotechnology company that develops antibody-based treatments for life-threatening diseases. The basis for this is the protein IL1RAP that is involved in a number of diseases and where Cantargia has established a platform. The main project, the antibody CAN04, is being studied clinically as combination therapy with chemotherapy or immune therapy with a primary focus on non-small cell lung cancer and pancreatic cancer. Positive interim data from the combination with chemotherapy indicate stronger efficacy than would be expected from chemotherapy alone. Cantargia's second project, the antibody CAN10, addresses treatment of serious autoimmune/inflammatory diseases, with initial focus on systemic sclerosis and myocarditis.

Cantargia is listed on Nasdaq Stockholm (ticker: CANTA). More information about Cantargia is available at www.cantargia.com. 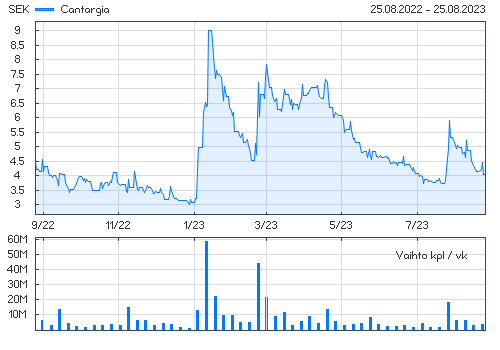 Cantargia AB is engaged in the development of products used in the treatment of cancer. It has developed specific antibodies against IL1RAP to treat serious, life-threatening diseases. The company's first product candidate, CAN04, has also been designed to treat different forms of cancer, with the initial focus on the treatment of non-small cell lung cancer and pancreatic cancer.