"End of 2021 and beginning of 2022 were extremely volatile. Raw material prices increased over 100%, due to which processed goods, which prices were fixed in fall with retailers, were significantly loss making. Therefore, it should be viewed as right decision to sell Heimon Kala OY, as seen from company's results. Independently, other group companies were profitable, even Estonia if to deduct loss from Finnish exports. During Q4 we can demonstrate that our other companies can manage even in very volatile environment. PRFoods has no exposure to Ukraine, Belorussia, and Russia, thus the war does not affect as directly. At the same time, we must take into account higher costs, including energy. Fish farming can pass extra costs directly to consumers, processing units must monitor that gross margin is kept, even if sales might be compromised.

Grave mistakes in Finnish management caused there a crisis, survival of which independently was challenging. We believe that further consolidation in Finland affects positively Heimon Kala Oy performance in future and Estonian factory will continue to sell subcontracted products to Heimon Kala Oy.

Due to sale of business units, correction was made in the balance sheet of the group, due to purchase price of Finnish units in 2006-2007 and 2017. Please take into account that Swedish fish farming unit was separated from Heimon Kala Oy as part of the sale but was historically included in purchase price of Finnish businesses. Relevant adjustment will be made in annual report after directly consolidating Sweden to group. PRFoods is analysing various scenarios to reduce debt in order to invest in new fish farming projects.”

Consolidated Statement of Profit or Loss And Other Comprehensive Income

*The results of 9m 2020/2021 have been adjusted and show only line-by-line consolidated operating results from continuing operations. 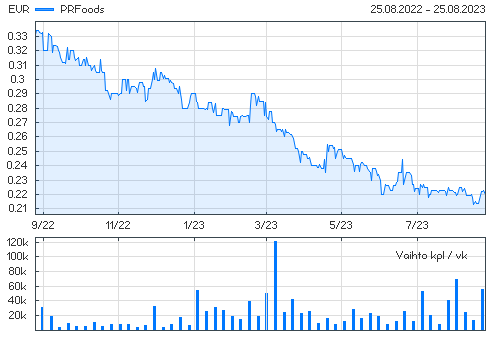 AS PRFoods is a fish farming and production company which is listed on the main list of NASDAQ OMX Tallinn Stock Exchange since 5 May 2010.

AS PRFoods’ key market is Finland, where the company is amongst the three largest fish production companies. Since the acquisition of John Ross Jr. and Coln Valley Smokery in the summer of 2017, the Group has expanded its sales to 37 countries in Europe, North and South America, and Asia.