The shareholders of Genovis AB, corporate identity no 556574-5345, are hereby given notice of the Annual General Meeting on Thursday, May 20, 2021.

Due to the COVID-19 pandemic, the Board of Directors has decided that the Annual General Meeting shall be conducted without the physical presence of shareholders, representatives and third parties, and that shareholders shall only be entitled to exercise their voting rights by postal voting before the Meeting. Information on the resolutions passed at the Annual General Meeting will be disclosed on May 20, 2021, as soon as the outcome of the postal voting has been finally confirmed.

To be entitled to participate in the Annual General Meeting, shareholders whose shares are held in the name of a nominee must, in addition to giving notice of participation in the AGM by submitting their postal vote, re-register the shares in their own name so that the shareholder is registered in the share register as of the record date on May 11, 2021 Such registration may be temporary (so-called "voting right registration") and is requested from the nominee in accordance with the nominee's procedures at such time in advance as determined by the nominee. Voting rights registration that has been made by the nominee not later than Friday, May 14, 2021 will be taken into account in the preparation of the share register.

The Board of Directors has decided that shareholders should be able to exercise their voting rights only by postal voting in accordance with Section 22 of the Act (2020:198) on temporary exceptions to facilitate the execution of general meetings in companies and other associations. A special form must be used for the postal vote. The postal voting form is available on the Genovis website: https://investor.genovis.com/en/corporate-governance/general-meeting/

The completed and signed postal voting form shall be sent by mail to Genovis AB c/o Advokatfirman Källén AB,Klostergatan 10, 222 22 Lund, Sweden, or by e-mail to Completed forms must be received by Advokat Källen no later than Wednesday, May 19, 2021. Shareholders may not assign specific instructions or conditions to the postal vote. The postal voting form will be deemed to be invalid in its entirety if this happens.

1. Election of Chairman of the Meeting.
2. Election of two persons to verify the minutes.
3. Preparation and approval of voting list.
4. Approval of the agenda.
5. Consideration of whether the meeting had been duly convened.
6. Presentation of the annual report and the consolidated accounts, as well as the audit report.
7.  Resolutions on:
a. adoption of the Income Statement and the Balance Sheet, as well as the Consolidated Income Statement and the Consolidated Balance Sheet,
b. allocation of the Company's result in accordance with the adopted balance sheet
c. discharge from liability to the company of the Directors and the Chief Executive Officer.

11. Determination of fees for the auditor.
12. Election of auditor.
13. Resolution on approval of the remuneration report.
14. Appointment of members to the Nomination Committee and adoption of guidelines for the Nomination Committee.
15. Resolution authorizing the Board of Directors to decide on the issuance of shares.
16. Authorization of the Chief Executive Officer to make such formal adjustments to the resolutions as may be necessary in conjunction with registration and implementation thereof.
17. Adjournment.

Attorney Arne Källén to chair the meeting, or, in the event he is unable to participate, the person appointed by the Board of Directors.

Item 2 Election of two persons to verify the minutes

The voting list that is proposed for approval is the voting list based on the meeting's shareholder register and received postal votes, verified by the minute-checkers.

The Nomination Committee proposes that the Board shall consist of five members without deputies.

The Nomination Committee proposes that fees until the close of the next Annual General Meeting shall be paid in the amount of SEK 150,000 to each Board member who is not employed by the company and SEK 300,000 to the Chairman of the Board.

Item 10. Election of Directors and Chairman of the Board.

Re-election of Torben Jørgensenas Chairman of the Board.

Steve Jordan was born in 1953 and lives in the UK. He currently works as a consultant for several companies engaged in the development of novel technologies and materials for the life science industries. Prior experience includes Chief Scientific Officer and Senior Director R&D Chemistry at Biotage during the years 2005-2020. Before that he was Head of Business Development at CombiPure UK, Director of Analytical Sciences, Compound Management and Instrument Development at Millennium UK, and Section Leader for High Throughput Medicinal Chemistry at Roche Discovery Welwyn. Steve has no other board assignments and is independent in relation to the company, company management and the company's major shareholders.

Item 11 Resolution on fees to auditors

The Nomination Committee proposes that remuneration to the auditors shall be paid on approved account.

The Nomination Committee proposes the election of registered auditing firm Öhrlings PricewaterhouseCoopers AB ("PWC"). PWC has announced that in the event that PWC is elected, Neda Feher will be appointed auditor in charge.

Item 13 Resolution on approval of the remuneration report

The Nomination Committee proposes that remuneration will only be paid for direct costs associated with the assignment.

Item 15 The Board's proposal authorizing the Board of Directors to decide on the issuance of shares.

The Board proposes that the Meeting authorize the Board, on one or more occasions until the next Annual General Meeting, with or without preferential rights for shareholders, to issue new shares, convertible bonds or warrants. New shares may be paid for in cash and/or in kind or set-off or on other terms. This decision would mean that the share capital could be increased up to a maximum total of SEK 1,625,000 through the issuance of a maximum total of 6,500,000 new shares. When deciding on issuances without preferential rights for shareholders, the subscription shall be market-based at the time of the issue resolution.

The reason for the possible deviation from shareholders' preferential rights is to broaden the ownership group, acquire, or facilitate the raising of working capital, increase the liquidity of shares, carry out acquisitions, or procure or permit the raising of capital for acquisitions.

For a valid resolution under this item, the Meeting's resolution must be supported by shareholders representing at least two thirds of both the voting rights and the shares represented at the Meeting.

The annual report, audit report, articles of association, postal voting form, proxy form and the other proposals for motions will be available at the Company's office at Scheelevägen 2, postal address: Box 790, S-220 07 Lund, Sweden, and on the Company's website www.genovis.com as of April 29, 2021, and will be sent, upon request, to shareholders who provide their mailing address.

Number of shares and votes

At the time of issuance of this notice, the total number of shares and votes in the company is 65,465,714.

Information at the Annual General Meeting

Shareholders are reminded of their right to request information from the Board of Directors and the Chief Executive Officer pursuant to Chapter 7, sections 32 and 57 of the Swedish Companies Act. A request for such information shall be submitted in writing to Genovis AB, Attn: Legal, Box 790, SE-220 07 Lund, or by e-mail no later than May 10, 2021. 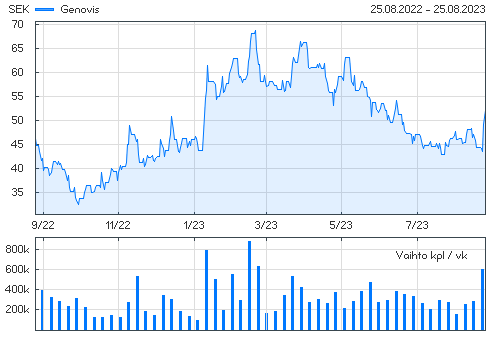 Genovis AB provides enzymes and technologies for analytical characterization and conjugation of biopharmaceuticals. The principal activities of the company are to develop, produce and market tools for developing new drugs and diagnostics. The Genovis product line comprises of GingisREX, FabRICATOR, GlyCLICK, GingisKHAN, GlycINATOR, Fabulous, lgGZERO, and Enzymes for O-glycan. The company serves mainly the medical device and pharmaceutical industries.