About Gränges
Gränges is an aluminium technology company who drives the development of lighter, smarter, and more sustainable aluminium products and solutions. The company offers advanced materials that enhance efficiency in the customers’ manufacturing process and the performance of the final products. Gränges’ innovative engineering has transformed the industry for more than 125 years, and the company holds leading positions in rolled products for thermal management systems, speciality packaging and selected niche applications. Gränges has production facilities and conducts sales on three continents, Asia, Europe, and Americas. The total annual production capacity amounts to 570 ktonnes. Gränges has 2,650 employees and the share is listed on Nasdaq Stockholm. More information is available at www.granges.com. 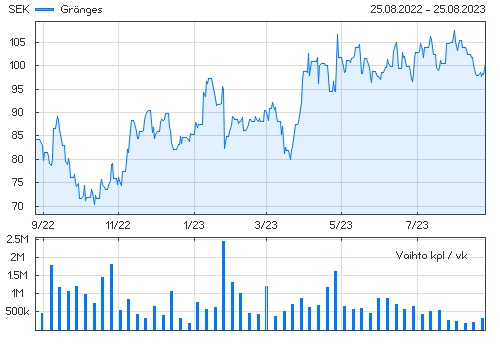 Granges AB is a supplier of rolled aluminium products for heat exchanger applications and other niche markets. The company's customers are in the automotive industry, the HVAC industry, and niche markets such as specialty packaging. It has five production facilities located in Sweden, China and the United States. It has competence centers for research and innovation in connection to the production facilities. It generates revenue by selling advanced material manufactured for specific customers and applications in long-term contracts.