Report from the annual general meeting in Bonava AB (publ)

The AGM adopted the income statement and balance sheet of the parent company and the group for the preceding year.

The AGM discharged the members of the board of directors and the CEO from liability for the preceding financial year. The AGM resolved that the number of directors shall be six, with no deputies. As board members Mats Jönsson, Viveca Ax:son Johnson, Åsa Hedenberg, Angela Langemar Olsson and Frank Roseen were re-elected and Per-Ingemar Persson was elected as new member of the board. The AGM elected Mats Jönsson as new chairman of the board.

PricewaterhouseCoopers AB (PwC) was re-elected as auditor for the company to serve for the period until the end of the next AGM. PwC has announced that Patrik Adolfson will continue as auditor in charge.

Guidelines for remuneration to the executive management

The AGM approved the board's proposed guidelines for remuneration to the executive management.

Presentation of remuneration report for approval

The AGM decided to approve the presented remuneration report.

Resolution regarding amendment to the articles of association

The AGM resolved to amend the articles of association so that a new article 13, regarding postal voting, is introduced (with consequential changes to the numbering of subsequent articles). The new article 13 of the articles of association will have the following wording: "Before a general meeting, the board of directors may decide that the shareholders shall be able to exercise their vote by post before the general meeting."

The AGM approved the board's proposal regarding the LTIP 2021. The LTIP 2021 has the same structure as the previous year's incentive plan and comprises approximately 50 employees consisting of members of the executive management and certain key personnel within the Bonava group, divided into four categories.

Participants in Bonava's LTI plans are recommended to, by way of allocation of LTI shares and personal investments, over time accumulate and retain shares in Bonava to the extent that their respective shareholdings amount to a value corresponding to at least six (6) months' salary before taxes. For the CEO the recommendation is instead a shareholding corresponding to at least twelve (12) months' salary before taxes.

Acquisition and transfer of shares of series B in Bonava

The AGM approved the board's proposal to authorise the board of directors, to, on one or several occasions for the period until the next annual general meeting, acquire a maximum number of shares of series B so that the company's holding following the acquisitions does not exceed 10 per cent of all the shares of series B in Bonava at any time. Acquisitions shall be conducted on Nasdaq Stockholm and at a price per share of series B that is within the price range for the share price prevailing at any time.

The purpose of the above authorisations regarding acquisition and transfer of own shares of series B is to enable financing of acquisitions of companies and businesses by payment with own shares of series B and to continuously be able to adjust the capital structure of Bonava and thereby create added value to the shareholders as well as to enable delivery of Bonava shares of series B and cover costs (including costs for social security costs and payment in accordance with the synthetic shares) in connection with the implementation of Bonava's incentive plan at any time.

Bonava is a leading residential developer in Northern Europe that creates homes and neighbourhoods where people have the highest quality of life. The company is the first residential developer in Europe to receive approval from the Science Based Targets initiative for its climate targets. With its 2,100 co-workers, Bonava develops residential housing in Germany, Sweden, Finland, Denmark, Norway, St. Petersburg, Estonia, Latvia and Lithuania, with net sales of approximately SEK 17 Bn in 2020. Bonava's shares and green bond are listed on Nasdaq Stockholm. 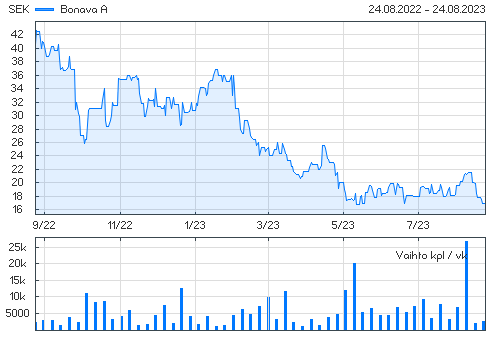 Bonava is a leading residential development company in Northern Europe which has been creating homes and neighbourhoods since the 1930s. With its 2,300 co-workers, Bonava operates in Germany, Sweden, Finland, Denmark, Norway, St. Petersburg, Estonia and Latvia, with sales of SEK 15,5 billion in 2019. Bonava's shares are listed on Nasdaq Stockholm.