The shareholders of SSAB AB (publ) (company registration number 556016-3429) are hereby given notice to attend the Extraordinary General Meeting to be held on Thursday, October 28, 2021. Due to the risk of continued spread of infection, the Board of Directors has decided that the Extraordinary General Meeting will be held without the physical presence of shareholders, representatives or third parties, and that the shareholders will only be able to exercise their voting rights in advance through so-called postal voting ahead of the meeting. Information on the resolutions passed at the General Meeting will be disclosed on October 28, 2021, as soon as the outcome of the postal voting has been confirmed.

A person who wishes to participate in the Extraordinary General Meeting must be listed as a shareholder in the presentation of the share register prepared by Euroclear Sweden AB concerning the circumstances as per the record date on Wednesday, October 20, 2021, and give notice of participation by casting its postal vote in accordance with the instructions under the heading "Postal voting" below so that the postal voting form is received by SSAB no later than on Wednesday, October 27, 2021.

The name, personal identification number (or company registration number), address and telephone number of the shareholder must be provided in the notice.

In order to be entitled to attend the Extraordinary General Meeting, shareholders whose shares are registered in the name of a nominee (including Finnish shareholders that are registered within the Finnish book-entry system at Euroclear Finland Oy) must, in addition to giving notice of participation in the Extraordinary General Meeting by submitting its postal vote, register their shares in their own names so that the shareholder is listed in the presentation of the share register as of Wednesday, October 20, 2021, the record date for the General Meeting. Such registration may be temporary (so-called voting rights registration), and request for such voting rights registration shall be made to the nominee in accordance with the nominee's routines at such a time in advance as decided by the nominee. Voting rights registrations that have been made by the nominee by October 22, 2021 will be taken into account in the presentation of the share register.

If the shareholder submits its postal vote by proxy, a power of attorney must be issued for the proxy. Proxies in original and, with respect to a legal entity, a certificate of registration, shall be submitted, together with the postal voting form, in ample time prior to the General Meeting to: SSAB AB, "EGM", c/o Euroclear Sweden AB, P.O. Box 191, SE-101 23 Stockholm, Sweden. A power of attorney is valid one year from its issue date or such longer time period as set out in the power of attorney, however not more than five years. The certificate of registration must reflect the circumstances on the day of the General Meeting and should not be older than one year at the time of the General Meeting. The Company provides proxy forms for shareholders wishing to vote by proxy. The form is available on the Company's website, www.ssab.com, and will be sent to those shareholders who so request and state their mailing address. Order may be placed by telephone on +46 (0)8 45 45 760.

The shareholders may exercise their voting rights at the Extraordinary General Meeting only in advance by postal voting in accordance with section 22 of the Act (2020:198) on temporary exceptions to facilitate the execution of general meetings in companies and other associations.

A special form must be used for the postal vote. The form for postal voting is available on the Company's website, www.ssab.com. The postal vote form is considered as notice to participate in the General Meeting.

The signed form must be received by SSAB by Wednesday, October 27, 2021 at the latest. The form may be sent by email to or by mail to SSAB AB, "EGM", c/o Euroclear Sweden AB, P.O. Box 191, SE-101 23 Stockholm, Sweden. Shareholders who are natural persons may also cast their votes electronically through verification with BankID via Euroclear Sweden AB's website https://anmalan.vpc.se/euroclearproxy. Such electronic votes must be submitted no later than Wednesday, October 27, 2021.

1. Election of a Chairman for the Meeting

2. Election of one or two persons to attest the minutes of the meeting

3. Preparation and approval of the voting register

4. Approval of the agenda proposed by the Board of Directors

5. Determination whether the meeting has been duly convened

6. Determination of the number of directors

8. Election of the Chairman of the Board

A. The Nomination Committee proposes:

1. Attorney Nina Svensson, or in the event she is prevented from participating, any other person appointed by the Board of Directors, be appointed to chair the meeting.

6. The number of directors is reduced from eight to seven.

7. Election of Maija Strandberg as new director of the Board. Maija Strandberg was born in 1969 and has a MSc, Economics from Turku School of Economics, Finland (part of Turku University). Since 2019 she is Senior Financial Counsellor at the Finnish Prime Minister's office, Government Ownership Steering Department. She has more than 25 years' experience from the private business community and she has previously had positions as CFO at Uponor, and Vice President, Finance at Valmet (Metso Paper). She is currently a board member of Finnair Oyj and Neova Oy.

8. Election of director Lennart Evrell as Chairman of the Board.

B. The Board of Directors proposes:

2. Oskar Börjesson, Livförsäkringsaktiebolaget Skandia Ömsesidigt, and Peter Lundkvist, Tredje AP-fonden, or if one or both of them are prevented from participating, the person(s) appointed by the Board, to verify the minutes. The assignment to verify the minutes also include verifying the voting list and that the received postal votes are correctly reflected in the minutes of the meeting.

3. The voting register proposed to be approved is the voting register prepared by Euroclear Sweden AB on behalf of the Company, based on the general meeting share register and received postal votes, verified and confirmed by the persons assigned to verify the minutes.

The Board of Directors and the Managing Director shall, if any shareholder so requests and the Board of Directors believes that it can be done without material harm to the Company, provide information regarding circumstances that may affect the assessment of an item on the agenda. A request for such information shall be made in writing to the Company no later than ten days prior to the Extraordinary General Meeting, i.e. no later than October 18, 2021, to SSAB AB, P.O. Box 70, SE-101 21 Stockholm, Sweden, or via email to The information will be made available on the Company's website www.ssab.com and at the Company's head office at Klarabergsviadukten 70, D6, SE-101 21 Stockholm, Sweden, no later than October 23, 2021. The information will also be sent to the shareholder who has requested the information and stated its address.

For information on how personal data is processed in connection with the Extraordinary General Meeting, see https://www.euroclear.com/dam/ESw/Legal/Privacy-notice-bolagsstammor-engelska.pdf.

The complete proposals for the Extraordinary General Meeting are set out above. The general meeting share register will be made available at the Company's head office.

Number of shares and votes

Stockholm, September 2021
SSAB AB (publ)
The Board of Directors 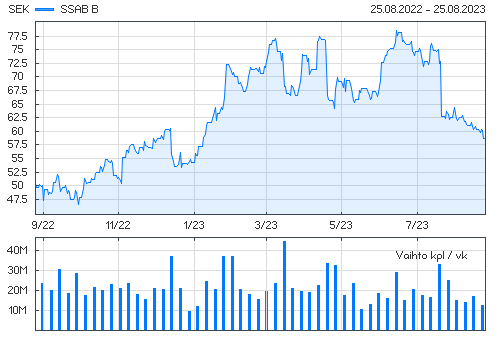