Start of second phase of construction of Kindrali Houses

On 3 February 2021, OÜ Marsi Elu, a company belonging to the AS Pro Kapital Grupp group, and Oma Ehitaja AS signed a contract for the construction of three five-storey building complexes in Kristiine City residential area. The construction of Kindrali Houses is being carried out in two stages with a total cost of 20 million euros including the VAT. In the first construction phase 129 apartments in two buildings with parking spaces under the houses and above-ground will be completed, c.a. 91.5% of the apartments have been already sold or booked. Due to high demand for the residential premises in Kristiine City, OÜ Marsi Elu has decided to speed up development process and last week notified Oma Ehitaja AS about the intention to start with the second construction phase i.e., third building as per signed construction contract. In the second phase a residential building with 66 apartments will be built with estimated completion in February 2023.

“I am very pleased to see that the development of Kindrali Houses has been so warmly received by people,” said Paolo Michelozzi, the Chairman of the Management Board of AS Pro Kapital Grupp. According to him, it is a unique and special development that integrates quality in materials and construction, diverse architecture and a people-centered approach into a pleasant combination.

Kindrali Houses will be built in the Kristiine City residential quarter with an exciting history. Here we have already built Kristina Houses, restored Tondi 51 barracks building, Marsi 6 lofts and this spring completed Ratsuri Houses. The contemporary and Nordic architecture of Kindrali Houses will bring a new kind of diversity to Kristiine City. On one hand, there is a tree-lined boulevard surrounding the houses with Brooklyn-like high first-floor homes or commercial premises that open directly onto the street. On the other hand, the spacious and private courtyard between the buildings with apple trees, berry bushes, cosy seating areas and play areas offers joy and activity for everyone. The versatile development of the Kindrali Houses will add lively atmosphere characteristic of the city centre to the Kristiine City's garden city milieu. The architects of the buildings and landscape of Kindrali Houses are the leading architect Indrek Tiigi and Allianss Arhitektid and the interior architect is Galina Burnakova.

More information about Kindrali Houses can be found at https://kindralimajad.kristiinecity.ee/en/

Kristiine City is an integral and versatile living environment in the heart of Tallinn, where functional city homes with the contemporary design are being built. The garden-like and private Kristiine City is convenient and easily accessible on foot, by bicycle, by car or by public transport. Kristiine City has become a place highly valued by people.

More information about Kristiine City can be found at https://www.kristiinecity.ee/en/

AS Pro Kapital Grupp (www.prokapital.com) is one of the oldest real estate developers in the Baltics, developing modern large-scale residential real estate projects in the capitals of Estonia, Latvia and Lithuania. During more than 25 years of operation, Pro Kapital has completed more than 20 development projects with a total saleable area of more than 250,000 square meters. The shares of AS Pro Kapital Grupp are listed on the Nasdaq Tallinn Stock Exchange and the bonds are listed on the Baltic bonds list and on Nasdaq Stockholm.

The main activity of Oma Ehitaja AS (www.oma.ee) is the design and construction of buildings and facilities using general contracting, design-construction contracting or full-time project management, as well as real estate and project development. Hundreds of satisfied apartment owners have found homes in the houses built and developed by Oma Ehitaja. 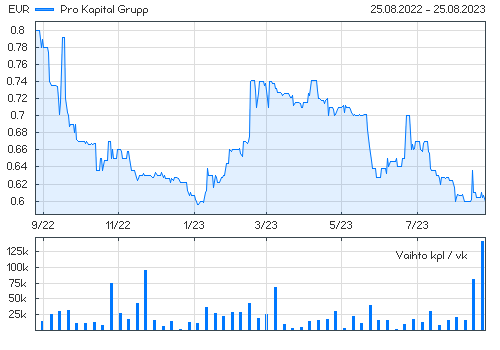 AS Pro Kapital Grupp is one of the oldest and leading real estate development companies in the Baltic States.