The Q1 2022 results of AS Tallink Grupp will be introduced at an Investor Webinar held today at 15:00 (EEST). To participate, please join via the following link; we kindly ask participants to provide their questions latest by 12:00 by email to: [email protected]. Further details available in a previously published announcement.

In the beginning of the quarter, the Group’s operations and operating results were continuously influenced by the COVID-19 Omicron variant in all home markets. The demand for travelling increased after the travel restrictions were lifted in February in Finland and Sweden, and in Estonia from mid-March. However, the demand was negatively affected by the geopolitical and military conflict that emerged by the end of February. The operational factors impacting results were following:

Operations during the quarter
Given the uncertainty regarding the duration of the crisis and the course of the post-crisis recovery with progress of vaccinations, as well as developments with the geopolitical and military conflict in Europe, the business environment has remained challenging. In the current situation, the focus has remained on costs and cash flow management to ensure the sustainability of the Group’s core business.

During the quarter, operations of the cruise ferry Baltic Queen on the Tallinn-Stockholm route were suspended for about a month. Cruise ferry Baltic Queen operated 5 return trips on the Tallinn-Helsinki route replacing the shuttle vessel Megastar. Operations of the cruise ferry Silja Europa were suspended during the quarter, except for 4 return trips on Tallinn-Helsinki route replacing the shuttle vessel Star. Cruise ferry Romantika was chartered out on a long-term charter agreement from March.

Operations of the cruise ferry Silja Serenade were restarted from the end of March after being suspended throughout most of the quarter.

Operations of the Riga-Stockholm route as well as the cruise ferry Victoria I were suspended during the quarter.

Revenue from route operations (core business) increased by EUR 46.8 million to EUR 91.4 million. The passenger operations and segment results on all routes were still significantly affected by the COVID-19 situation.

The Latvia-Sweden route operations were suspended. The EUR -5.0 million segment result reflects the expenses of the suspended cruise ferries Isabelle as well as Romantika before the start of her charter period.

Revenue from the segment other increased by a total of EUR 6.0 million and amounted to EUR 15.2 million. The increase was mainly driven by accommodation sales, various retail activities and to a lesser extent by chartering out vessels.

Earnings
In the first quarter of 2022, the Group’s gross profit improved by EUR 75 thousand compared to the same period last year, amounting to EUR -19.9 million. EBITDA decreased by EUR 4.6 million and amounted to EUR -11.0 million.

As a result of increased interest-bearing liabilities, net finance costs increased by EUR 1.0 million compared to the first quarter of last year.

Due to the changed economic environment and suspension of vessel operations, ship-related investments were kept to minimum and only critical maintenance and repair works were performed.

Investments were also made in the development of the online booking and sales systems as well as other administrative systems and in relation to the opening of Burger King restaurants.

Dividends
Due to a complicated operating environment and considering the Company’s long-term interests, the Management Board has decided to prepare a proposal to the shareholders’ annual general meeting not to pay a dividend for 2021.

*The staff costs in the first quarter of 2021 were impacted by salary support in total amount of EUR 2.0 million from the government of Estonia, paid directly to employees in March. In addition, the workload and remuneration of a part of Estonian and Latvian personnel was reduced to 70%, majority of Finnish personnel were on unpaid leave, workload was reduced to 20% for a large part of Swedish personnel and up to 80% was remunerated by the Swedish Government. Salary support was also paid by the government of Sweden in total amount EUR 2.9 million that was recognised as other operating income.

Economic Environment
The Group has the most exposure to the economic and travel restriction developments in Finland, Sweden and Estonia. In the first quarter of 2022, the Group’s economic environment was still affected by the ongoing COVID-19 pandemic.

In the first quarter, the cargo business remained solid supported by the continuously robust business confidence on all home markets. The market conditions regarding the price competition remained challenging.

Despite some easing of travel restrictions in Group’s home markets during the quarter, the confidence of consumers on all home markets declined throughout the quarter. The confidence was also negatively affected by the rise of the geopolitical and military conflict in Europe. The latter contributed significantly to the rapid increase in global fuel prices.

Measured in euros and weighted with the Group’s consumption volumes, the global fuel prices increased, on average, by 129% in the first quarter of 2022 compared to last year. Increase in the fuel prices was the main cause of the Group’s overall fuel cost increase by 153%, or by EUR 17.1 million compared to the same period last year.

High levels of vaccination together with signs of decrease in new infection rates in Finland and Sweden resulted in governments’ decision to lift travel restrictions from February 2022. From March 2022, the restrictions were also lifted in Estonia. This contributed to demand for travel, which was evident in the increase in the number of bookings made for the upcoming periods.

For the foreseeable future, the key risks are related to developments with the COVID-19 situation, the ongoing geopolitical and military conflict, and their impacts on the economic environment.

Geopolitical and military conflict in Europe
The geopolitical and military conflict in Europe that started at the end of February is expected to have a negative impact on the demand of certain customer groups, mainly customers from the countries directly participating in the conflict and from Asian countries, together with the risk of an increase in some input prices, mainly fuel and raw materials. The exact magnitude and duration of the potential effects from the conflict remain difficult to assess.

Long-term charter of Romantika
In late March, the cruise ferry Romantika was chartered out for three years with extension options (3+1+1) to international routes between Norway and the Netherlands.

Due to the chartering out of cruise ferries Romantika and Isabelle, the Group does not intend to operate the Riga-Stockholm route in 2022.

Despite the uncertainties in the outlook of the economic environment the management expects a quicker recovery in the passenger traffic from the second quarter of 2022.

The Group is continuously looking for innovative ways to upgrade the ships and passenger area technology to improve its overall performance through modern solutions. The most recent technical projects are focusing on the solutions for reduction of the ships CO2 footprint.

Risks
The Group’s business, financial position and operating results could be materially affected by various risks. These risks are not the only ones we face. Additional risks and uncertainties not presently known to us, or that we currently believe are immaterial or unlikely, could also impair our business. The order of presentation of the risk factors below is not intended to be an indication of the probability of their occurrence or of their potential effect on our business.

1 Alternative performance measures based on ESMA guidelines are disclosed in the Alternative Performance Measures section of this Interim Report.
2 Does not include additions to right-of-use assets.

Consolidated statement of profit or loss and other comprehensive income 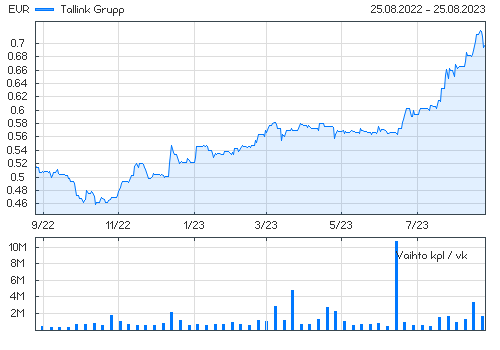